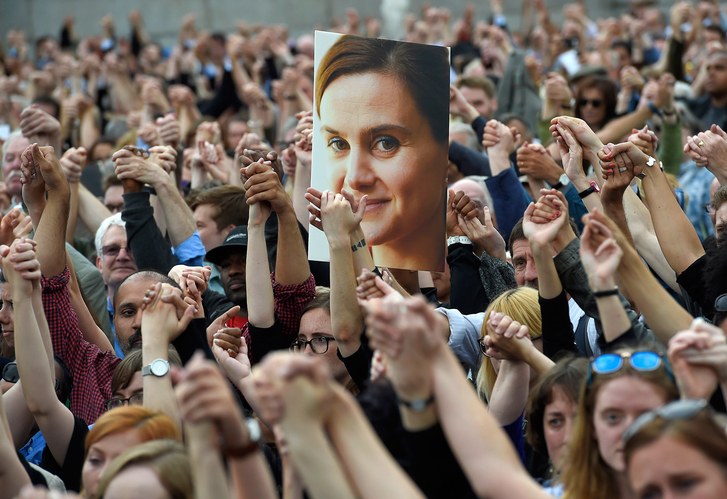 One year ago, on 16 June 2016, Member of British Parliament Jo Cox died after being shot and stabbed multiple times in Birstall, a village of West Yorkshire, outside the library where she was due to hold a surgery for local constituents. Thomas Mair, a man associated with far-right organisations, was found guilty of her murder in November and sentenced to life imprisonment with a whole life order.

On the morning of her death, Nigel Farage, the leader of the U.K. Independence Party (UKIP) unveiled a poster showing a line of dark-faced migrants snaking its way toward the camera, along with the slogan “Breaking Point.” I like to make links between art and politics as you know, but prefer not comment here what the aesthetics of the advertisement echoed …

Jo was a mum, a wife, an humanitarian. She was also a Member of Parliament who cared deeply about her party, and who believed that politics can make a difference, at a local community level and also globally. She was honouring politics.

A “Battle of Giants” : in the first column, Brexit, the triumphs of Trump and the Philippine’s Duterte, Erdogan’s referendum victory in Turkey, the growing authoritarianism of elected governments in Hungary and Poland. In the other column, the Green Party candidate Alexander van der Bellen’s narrow victory over a populist opponent in the Austrian presidential elections in November, Geert Wilder’s loss in the Netherlands in March, and more recently, Emmanuel Macron’s victory in France.

The partisans of liberal democracy have won important battles. There are good reasons to think that they will win yet another battle in Germany this fall, while at the same time, the US and the UK seem to sink in an incredible political chaos, the second not even being in a polltical position to really start Brexit negotiations, one year after the referendum.

And because Britain is stronger in Europe, and because Europe is stronger with Britain, the French President rightly said yesterday that the door is still open for Britain to remain in the EU : who knows ?

But whatever the output of this Brexit story, let’s make no mistake : the challenge is not going away, because the underlying concerns that have fueled populism have not gone away.

The urgency consists in improving people’s standard of living by coming back to an environment favoring a sustainable growth in developed economies, and making it so that people feel that the “system”, in its representatives as well as its institutions, works for them again. And we will need to clarify what a “sustainable” growth means, with its “fifty shades of green”.

But at some stage, it will mean also providing people with the tools to help them understand the sense of dislocation they feel. Like in a therapy, we will need to name the problem the people are often scared to name, instead of letting it to far-right politicians.

“While we celebrate our diversity, what surprises me time and time again as I travel around the constituency is that we are far more united and have far more in common with each other than things that divide us” : Jo Cox believed in a fairer, kinder and more tolerant world.

On 16–18 June, the Jo Cox Foundation, established to advance the values and causes she fought for in her life is organizing the biggest neighbourhood celebrations since the Jubilee street parties. It’s called The Great Get Together. The Foundation and Jo’s family are inviting people to get together with their neighbours to share food and celebrate all that we hold in common. It could be a street party or a shared barbecue, a picnic or a bake off. What matters is to have fun and bring communities closer together.

Because ultimately, it’s by bringing communities together and celebrating all that unites them that we will kill this “us versus them” crazy story.

“Truth Is a Beautiful Thing”, the second studio album, written and conducted by the British trio London Grammar, was released just a few days ago : “Hold your heart, hold your hand would be to me, the greatest thing. … Oh, the truth is a beautiful thing” …

Thank you Brendan : with Jo, with Cuillin and Lejla, you are exactly the Europe we love.