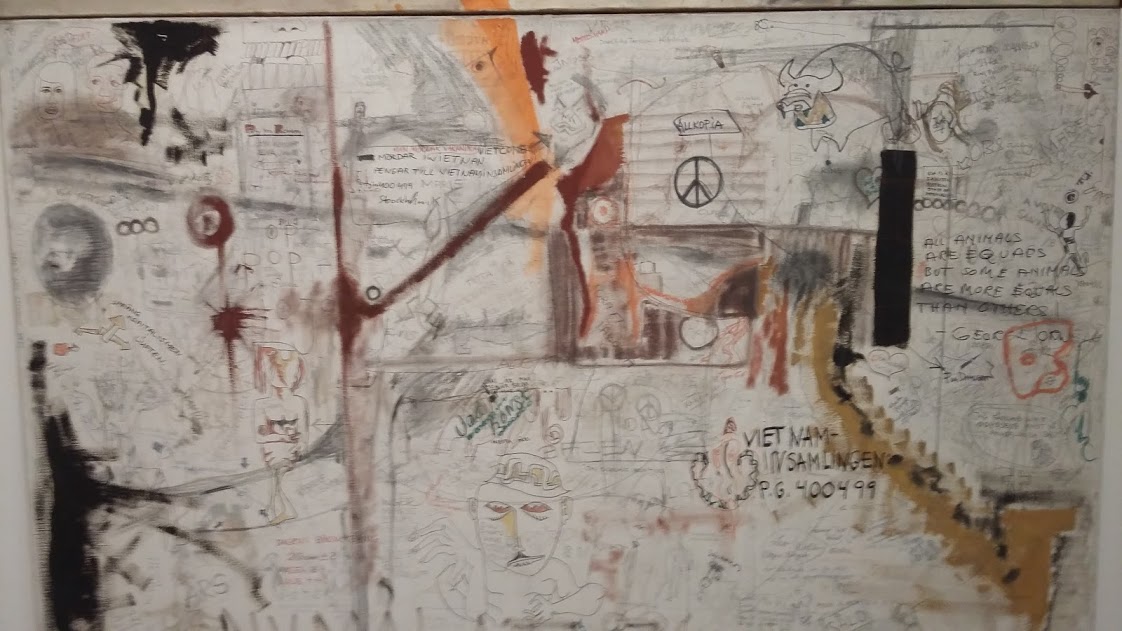 If Basel Committee members due to meet in Lulea (Sweden) on June 14-15 have time when connecting by Stockholm, I would suggest them a short visit of the Moderna Museet (Museum of Modern Art). They could view there the provocative work (I love it as far as I’m concerned!)  of olish artist Tadeusz Kantor, “Signez, s’il vous plait” ( “Sign, please !” ).

The intent of the artist was to let spectator sign the work, in his absence … and both the title and the idea of his work are exactly what this Lulea meeting is about.

At the end of the London Summit, the Leaders of the Group of Twenty committed to strengthening transparency and accountability, enhancing sound regulation, promoting integrity in financial markets and reinforcing international cooperation. I must say, with no irony, that the « sherpas » who prepared the London G20 Leader’s summit communiqué to be endorsed by the heads of government/heads of state were particularly inspired.

As far as prudential regulations were concerned, the “Basel Committee on Banking Supervision” (BCBS), but also the accounting standard setters, were supposed to do the technical job. It’s true it’s technical, painful for some, but it’s worth to understand what is at stake (on this, you can read some old LinkedIn posts, republished on Aristote : http://www.aristote.eu/basel-iv-but-read-it and http://www.aristote.eu/basel-dc).

The Basel Committee did a great job initially, giving mandatory guidelines to national jurisdictions to improve the quality and quantity of the Bank’s own funds. They were also dealing with the question of liquidity transformation in the Banking sector, transferring the risk to other sectors of the economy, to protect ultimately depositors and tax-payers.

They also addressed the build-up of excessive on-balance and off-balance sheet leverage by introducing a simple, non-risk based “backstop” measure. The idea was to have a simple measure based on an accounting representation of exposures that isn’t sensitive to the underlying credit risk and acts as a reminder in the financial management of activities. A threshold of 3% was defined early 2016 to ensure this would not be the binding constraint for capital planning, preserving the incentive of capital ratio based on risk-based models, which finally proved to have been relatively robust in the jurisdictions where they were largely used.

All these measures have been implemented in most of national legislations, but some final decisions are to be taken in terms of capital requirements, officially to reduce their complexity, limit their disparity and finally improve their comparability among jurisdictions.

At the end of the G20 Summit held on 4–5 September 2016 in the city of Hangzhou in China, the Leaders reiterated their support for the work by the BCBS to finalize the Basel III framework by the end of 2016, “without further significantly increasing overall capital requirements across the banking sector, while promoting a level playing field”.

When I wrote my “Basel- IV, a policy choice …” paper just after BCBS met in Santiago de Chile, a meeting of the “Group of Governors and Heads of Supervision” (GHOS) was scheduled for January 8. But, in a complicated US political environment, the meeting was cancelled.

In Lulea, the BCBS could agree on the final calibration of the all framework. If it is the case, the Chairman of the GHOS, Governor Draghi, would probably organize a meeting of the oversight body to validate it, before or short after the Hamburg G20 Summit to be held on July 7-8.

No transparency on the revised set of proposals, no holistic review of the entire suite of revisions and their interaction with each other : on June 15, in a city of about 75000 inhabitants, on the coast of northern Sweden, a few international experts could sign an accord which will have ultimately significant negative consequences on market liquidity and lending activity, paradoxically penalizing most the exposures to high quality credit. European economy should be severely penalized as 75% of its economy relies on Bank financing.

In order to convince Europeans to sign, BCBS experts have suggested a very progressive implementation (a “phase-in” in their jargon) : these last reforms would have their full effect in January 2027 … enough to have consequences on the jobs of our children or grand-children, but sufficiently late not to have any effect on ours.

We are far from Hangzhou statement and from the mandate, which was given to FSB and BCBS by the Leaders of the Group of Twenty …

Laurent Lascols
← In Love with Lou More in common →
We use cookies to optimize our website and our service.
Manage options Manage third parties Manage vendors Read more about these purposes
Preferences
{title} {title} {title}