We the People of Europe ! 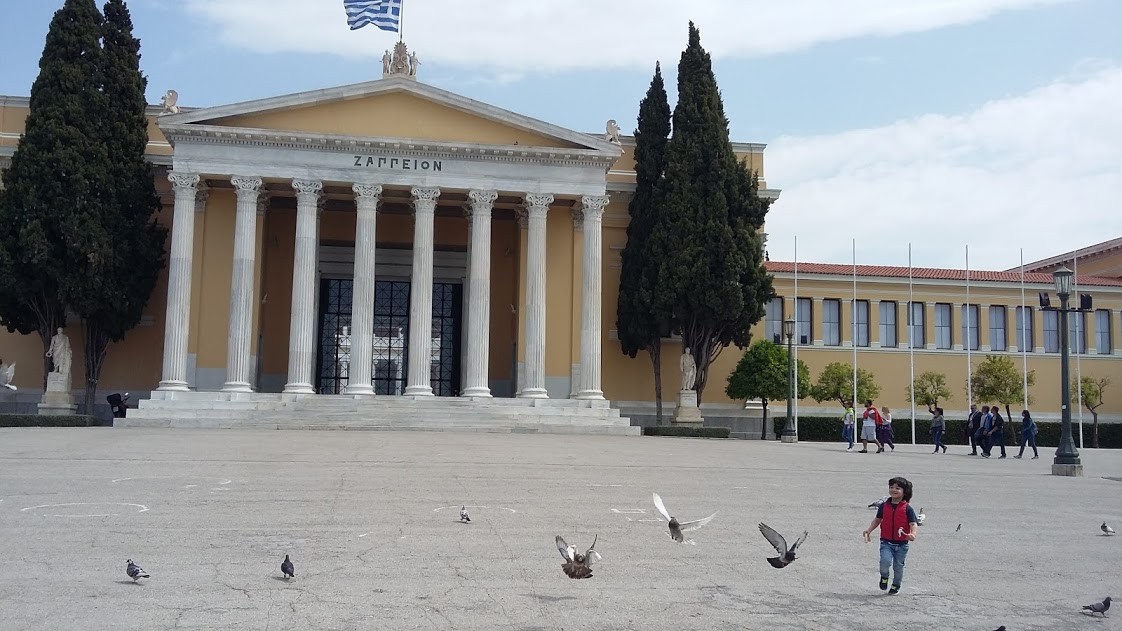 The first three words of the United States Constitution, “We the People”, mean that the government of the United States “exists to serve its citizens”. Old of more than two centuries, it’s the world’s longest surviving written charter of government … with only seven articles and less than five thousands words (and a couple of amendments since then to be honest).

At the time of the project of European Constitution, the authors didn’t take enough time to do a document as short as the US one … And for many reasons, the length of the document being possibly one of them, it was finally rejected by French and Dutch voters in May and June 2005.

What about coming back to European citizens, to clarify what we want to do together, “we the people” ?

Let’s be clear : I understand and agree that we should not make any confusion between the “European project” and the “European Union” way to conduct it. But it’s a matter of fact that nobody suggested any other way to go forward. I remember in France all the people referring to a “plan B” at the time of the referendum. But as of today, more than ten years after the referendum, nobody knows what this “plan B” was about.

And then, the question is very simple : what citizens think of the “European Union”, and what do they want to do with it going forward ?

A renewed love for the EU project …

A very interesting survey was conducted by the Pew Research Center in the European Union (EU) just before the French presidential election. With 9,935 respondents, ten countries covered (including the UK), accounting for roughly 80% of the EU population and 84% of the EU economy, its results are worth to analyse.

Let’s start with the good news : European citizens have markedly improved their views of the European Union project in the recent period.

To take only five of the ten countries, ironically including the UK, the reversal in the trend after Brexit is pretty clear : 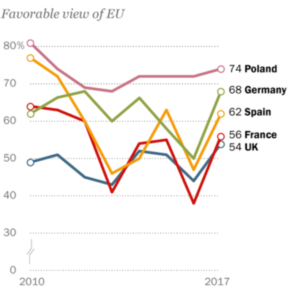 The other good news is that younger Europeans hold particularly positive views of the European Union.

To note : the generation gap is largest in the UK, the Netherlands and France. Ask Theresa May : I believe she understood that at the recent UK parliamentary elections … 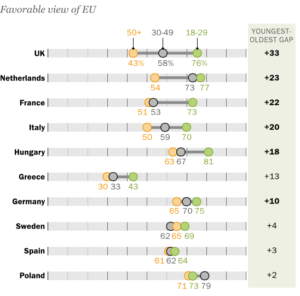 Yet, these results don’t necessarily mean that citizens are satisfied with the current state of affairs in Europe.

In a recent post, I quoted this sentence by the German poet-dissident Wolf Biermann : “I can only love what I am also free to leave”.

It’s the true question, and the answer to this question is probably the third good news of the survey : yes, many citizens in these European countries want a referendum on membership, which proves a real willingness to have their say, but no, they don’t want to leave EU : 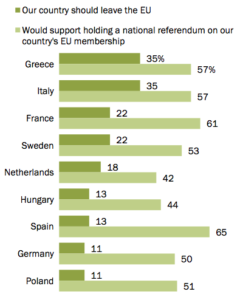 If my friends working in the European institutions read this post, I’m not so sure they are going to like which follows.

Because when the survey goes further into details, one must admit that the Union People want is not exactly, it’s an euphemism, the one which is in the Treaties.

As the economy has begun to recover in a number of European nations, the public mood is brightening. But better economic times don’t seem to have boosted confidence in the way EU economic policies are conducted, particularly in the southern countries : 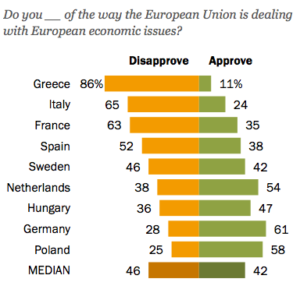 The results are very negative too if you focus on the question of refugees (even if one must recognize it’s a much wider issue that just an economic one) : 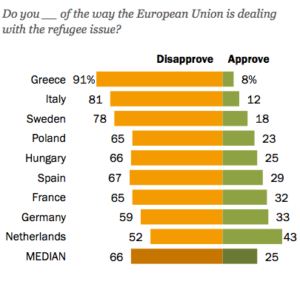 The Germans ? Seven in ten Europeans outside of Germany see that country positively and about half think Chancellor Angela Merkel do right things. But a clear majority think Germany has too much influence in the EU decision-making process.

The survey was done before President Macron was elected in France. Since then, there is a strong franco-german willingness to relaunch the European project.

It’s a good news again, because nothing can be done in Europe without the states. It will be better with more member states. And it will be perfect if the citizens, “we the people”, are listened to !

Iconography : a child chasing after birds in front of the Zappeion, in the National Gardens of Athens, Greece, April 30, 2017 (personal collection).