Let me share three very simple ideas about it, even if at the end of this post, I will have more enemies than before.

First : bitcoin is a money

It’s very strange to see senior regulators or bankers explain, with this discrete arrogance that characterizes them, why bitcoin is just an illusion.

Money was born thousands of years ago from the desire of humans to trade goods. They needed rare and solid material : they chose shells, gold, silver …

Once upon a time (a long time ago if you prefer), Kings, but also cities, or leagues of merchants, started to mint coins to facilitate these exchanges.

It was the reign of “metal currencies”, with its numerous currency traders in all “rues au change” of European and Mediterranean cities. This world was constrained by the limited nature of precious metals stocks of course. And it’s only when Spain brought back tons of gold and silver from the Americas, that we saw Europe’s growth picking up again.

That is why closer to us, in the late nineteenth century and early twentieth, gold and silver being no longer sufficient to support the dynamism of the economy, the notes first, and then the so called “scriptural” currency (only written in registers and then electronic accounts) became predominant.

In 1971, President Nixon declared the inconvertibility of the Dollar in gold. In 1999, the Euro was created without any “metallic” reference.

We entered then in the era of what anglo-saxon speaking countries call “fiat” money, a money whose value is not derived from any intrinsic value or guarantee giving the way to a conversion into a valuable commodity but by government order (« fiat »).

In latin countries, we prefer to use derivatives of the latin word “fiducia”, which means “confidence”, to qualify this money . A “fiduciary” money is supposed to fullfill three functions : a medium of exchange, a unit of account, and a store of value.

It’s true to say bitcoin is not backed by any government order, but only by the faith of the fools who buy it and of the greater fools who buy it from these lesser fools. But I’m sorry to say that US dollars or euros too consist mainly of numbers out there in cyberspace. Sometimes they’re stored in paper or coins, but while the paper and coins are material, the dollars or the euros they represent are not.

And we must come to the conclusion that in this history of dematerialization, the idea of ​​bitcoin – a currency limited by its scarcity by the way – is not absurd : a cryptocurrency is in some way to the digital era what a bank note was to paper one.

To understand a phenomenon, dear regulators, it’s usually better to name it.

Second : bitcoin is a bubble

It will be the shortest idea.

Lets come back to the three functions of a “fiduciary money” : a medium of exchange, a unit of account, and a store of value.

To serve as a “medium of exchange and a unit of account,” bitcoin must be accepted as payment for a sufficiently large set of goods or services, or other assets. If you compare a time-series of the dollar price of bitcoin to the number of transactions and the quantity of goods and services that are sold and purchased by bitcoins, you can only come to the conclusion that the price of bitcoin is grossly inflated relative to its actual use.

What about the third function ? Some suggest that bitcoin is becoming a “safe haven” from national “fiat” currencies, particularly those that have been inflated through Quantitative Easing (QE). If there was a correlation in the price of gold and bitcoin, then of course you could make the case that investors are fleeing fiat currencies towards fixed supply assets. But that is not what is happening. 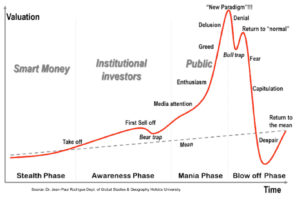 Third : bitcoin is a political project

Told by Bloomberg, the story is really charming :

“Jane uses bitcoins to buy a cup of coffee at Sally’s internet café, using her private key to transfer ownership of the currency. Word of the transaction is sent through the bitcoins network to “miners” with powerful computers. Miners use trial-and-error computations to solve a puzzle created by combining data about recent transactions. The first to find the unique number that unlocks the puzzle earns the right to buddle the transaction into a confirmed batch, known as a block. The winning miner is rewarded with newly minted bitcoin – but only after other miners confirm that the block’s transactions don’t contain any attempts the same funds twice.

So called “blockchain” acts as a public ledger showing all transactions, though the identities of participants are obscurred. Each block has a cryptographic link to the previous one. Every addition of a new linked block to the chain makes it harder for a rogue miner to steal Sally’s bitcoin by rewriting the sequence of transactions.

Bitcoin central design feature, that it is not governed by a central bank or decision-making authority, means that responsibility for its distribution is forfeited. But anyone, who has a few neurones working together understand that sooner or later, the mining industry will concentrate in a few hands.

Back to basics : when a major financial crisis occurs, it is usually caused by the failure of widespread and interconnected debts. Once these debts fail, what happens is that a large part of the money supply effectively disappears. With this money gone, governments have a choice whether to replace it or not. Choosing not to replace it through the creation of new money (inflation) becomes a political decision with political repercussions. If the decision is made to replenish the money supply, like it was in 2008 through Quantitative Easing (QE), then how this money is channelled through the economy will also influence the political economy.

Who will take the decisions in the “peace and love” world of bitcoin ?

Let’s regulate all this !

← Just say, I believe "It must be green ! Okay ?" →
Gérer le consentement aux cookies
We use cookies to optimize our website and our service.
Manage options Manage services Manage vendors Read more about these purposes
Preferences
{title} {title} {title}