Here in Europe, many are looking forward to seeing the United States emerge from the chaos that the President Trump has plunged them into for four years.

To be honest, I don’t believe that by curing the symptom, the United States got rid of the disease. The latter, which results from the abandonment of the middle classes in globalization, goes far beyond the United States and places an overwhelming responsibility on our democratic elites to prepare for the future.

But for anyone who cares about climate and the environment, it’s hard not to celebrate the arrival of Joe Biden and Kamala Harris in the White House.

The first decision of the President-elect was to announce the return of the United States into the Paris agreement.

I can already hear the more pessimistic, who will explain to us that without the Senate, nothing will be possible for him, that in a federal system, the President finds himself confined to the role of arbiter, etc …

This is not totally wrong and it is what saved us from the worst for four years!

This is, however, to underestimate the enormous symbolic and spillover effect that this return of the US to the international climate scene can have.

According to the Climate Action Tracker (CAT), the Biden plan – which targets net zero emissions for the US by 2050 – and associated policies would result in cumulative emission reductions between 2020 and 2050 of around 75 Gt CO2eq.

These emission reductions would lead to a decrease in turn-of-the-century warming of about 0.1 ° C from the current CAT estimate globally.

Meanwhile, the CAT had estimated that China’s new targets were likely to reduce turn-of-the-century warming by 0.2 to 0.3 ° C.

With the election of Joe Biden, China, US, EU, Japan, South Korea – two-thirds of the world economy and over 50% of global greenhouse gas emissions (GES) – are thus embarked in Paris logic, even if their climate strategies still lead us towards a world at + 3 ° C for this group of countries.

And if you expand the scope to the 126 countries that have made similar announcements on net zero emissions, 63% of global emissions are covered.

So yes, these elections also reminded us that the United States has a federal structure, and a lot has to be done at the city and state levels. But it’s not necessarily bad new because since Elinor Ostrom, we know that the management of the commons can also be carried out effectively at the local level.

As of June 1, 2017, following the announcement of the withdrawal from the Paris agreements by Donald Trump, two initiatives had been taken in the US: 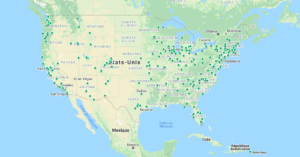 Of course, Europe must continue to move forward on the issue of decarbonization. But, unless we definitely doubt our democracies, it would be absurd to underestimate the impact of this American election on the ability of our “United Nations” to regain viable climate trajectories.

It will certainly require vigilance: many states, large companies and financial institutions – doped for decades with coal, oil and gas – may still have difficulty in resolutely taking the right path even if their communication has done so. .

It is up to the young generation to continue to push in this direction!