On March 18, the European Central Bank (ECB) published a blog post by Luis de Guindos, Vice-President of the ECB, detailing the framework of the ECB’s ongoing “economy-wide climate stress test” and its preliminary results.

The stress test covers 4 million companies worldwide, 2000 banks and projects, 30 years into the future, with a primary objective of assessing the exposure of euro area banks to “future climate risks” by analyzing the resilience of their counterparties under various climate scenarios.

Both physical risks (expected increase in the frequency and magnitude of disasters caused by natural hazards) and transition risks (delayed or abrupt introduction of climate policies to reduce CO2 emissions) pose a threat to financial stability via banks or financial institutions’ potential exposure to defaulting firms through their lending or asset holdings.

The ECB is using the framework of the Network for Greening the Financial System (NGFS). It classifies scenarios in four broad groups, combining two important dimensions, the level of mitigation effort and the degree of uncertainty of the transition. 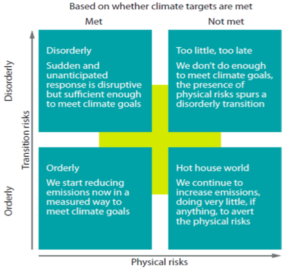 The results underline the ECB’s expectation that economies must urgently transition to a “greener” status to ensure that both Paris Agreement goals are met and in order to minimize “the long-run disruption to our economies, businesses and livelihoods”.

Unsurprisingly, 15 years after the Stern report, the ECB concludes that short-term costs of adapting to green policies are “significantly lower than the potentially much higher costs arising from natural disasters in the medium to long term”. In the absence of climate policies and further regulation, the costs to companies from extreme events are expected to be substantial.

In this context, the publication on March 24 by a collection of climate organizations of a new report titled Banking on Climate Chaos 2021 was a bit disappointing from the perspective of the financial stability of the Euro area.

Analysing activities of 60 of the world’s largest commercial and investment banks, the report is aggregating their leading roles in lending and underwriting of debt and equity issuances in the sector of fossil fuel.

The good news ? At a global level, fossil fuel financing dropped 9% last year, parallel to the global drop in fossil fuel demand and production due to the COVID-19 pandemic.

The bad news : 2020 levels remained higher than in 2016, the year immediately following the adoption of the Paris Agreement. Moreover, in some areas, especially European Union, it’s in strong progression : 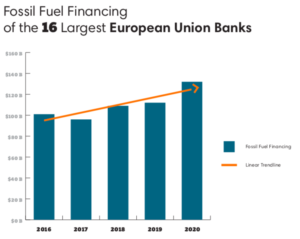 Let’s be honest : those results are very counter-intuitive, in an area where banks never lose an opportunity to boast of their clean, green credentials.

The “inconvenient truth” to paraphrase Al Gore’s eponymous film, would be that the biggest banks are so heavily stucked with fossil fuel assets that they cannot stop financing those companies without putting their own stability at risk.

Since 2008, we knew they were too big to fail. We would have then to admit today that they are also too big to shift to a decarbonized economy.

If this is the case, instead of reinventing the wheel, the European Central Bank should be well inspired to think, through its Single Supervisory Mechanism, about the way to solve this issue, by creating defeasance instruments for example to help Eurozone banking system to stop its addiction to the good old days of the carbonized economy.