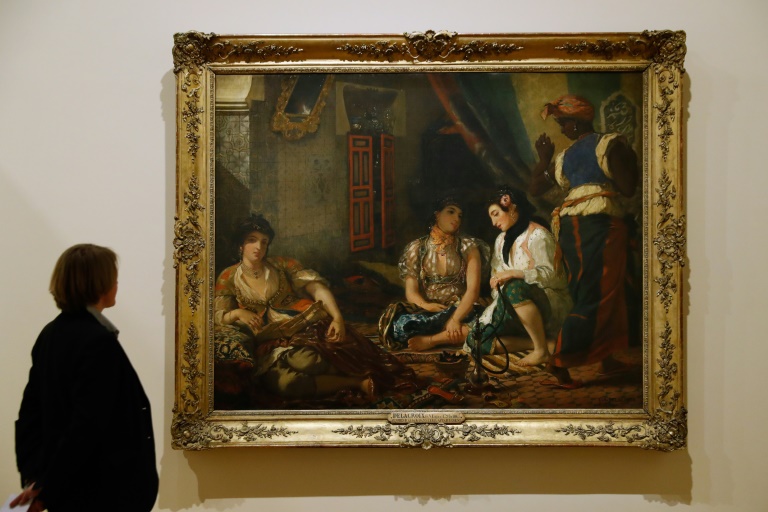 A Republican and a revolutionary, a Christian, an orientalist, a romantic with touches of classicism, the unclassifiable Eugène Delacroix is ​​to discover at the Louvre since March 29 and until July 23, 2018.

I have a particular fondness for this painting : in 1832, in recently conquered Algiers, Delacroix introduces himself for a few hours in a harem. He brings back this masterpiece, “Women of Algiers in their apartment”, which will often be called a “stolen glance”. The sensuality of these women, their abandoned attitudes, suggest a lasciviousness impossible to conceive in the West. The corset of good morals of the European society of his time is unbridled.

With all the caution required when I speak here of Algeria, it seems to me that Delacroix’s Orientalism proceeds from a rather just vision, he who really did the trip to Morocco and Algeria.

Besides, would he have been, without a just vision, so inspiring?

Baudelaire defines this painting as “a little interior poem, full of rest and silence, cluttered with rich fabrics and toilet brimborions”. Cezanne describes “these pale roses and embroidered cushions, this babouche, all that limpidity […] that enter your eye like a glass of wine in your throat, and you are immediately drunk”. And Renoir: “there is no more beautiful painting in the world” …

Picasso will pay homage to this work with more than fifteen versions of “Women of Algiers in their apartment“. On May 11, 2015, the so-called “O” version of this series, acquired for $ 179.3 million will also become for a time the most expensive table in history at an auction.

But beyond these tributes of French artists, it is Algerian intellectuals who “justify” the best  this orientalism of Delacroix. The painting is at the center of the short story “Women of Algiers, girls of joy“, included in the collection L’Orient est rouge, by Leïla Sebbar (2017). But above all, it gives his title to Assia Djebar’s collection of short stories, published for the first time in 1980, where the famous Algerian novelist tells the experience, the difficulty of being, the revolt and submission, the rigor of the Law. who survives all the upheavals and the eternal condition of women. The cross look of a novelist with that of the two painters, Delacroix and Picasso.

I like his reading of the painting, in his postface entitled: “Forbidden look, cut glance”:

“Three women, two of whom are sitting in front of a hookah. The third, in the foreground, is half reclining, leaning on cushions. A maid, with three quarters of her back, raises an arm as if she were pushing aside the heavy wall hanging that closed universe; almost an accessory character, she only skirts the shimmering colors that dot the other three women. The whole meaning of the picture is played out in the relationship between them and their bodies, as well as their place of confinement. Prisoners resigned from an enclosed space that is illuminated with a kind of dream light coming from nowhere – greenhouse or aquarium light – the genius of Delacroix makes them both present and distant, enigmatic at most high point. “

Iconography: “Women of Algiers in their apartment”, proposed in the exhibition Delacroix at the Louvre until July 23, 2018 (PATRICK KOVARIK / AFP)