On March 6, talks between OPEC and Russia (so called OPEC+) failed to reach an oil production cut deal in the context of the coronavirus outbreak. At this point, producing countries abandoned all attempts to keep global markets balanced, sending the commodity tumbling this week.

In practice, this governance failure at OPEC+ means starting April 1, countries are free to produce at will. At the time I write this post, the WTI is at USD 31 per barrel, its lowest level since September 11 : 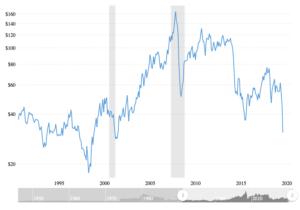 The US shale industry revolution was facilitated by three factors : innovation, cheap credit, and indifference to the environment. But, at these market levels, it is not viable anymore. Hereunder, an estimate of Brent-equivalent breakeven prices, to be compared to the chart above … 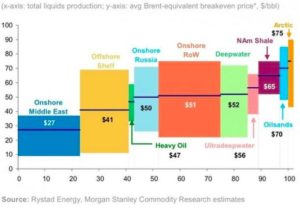 A devastating setback for the U.S. shale patch (and also, by the way, for deepwater and ultra-deep water exploration and production projects worldwide).

Cumulative high-yield energy default rates could hit 24% in 2021, according to a note published by JPMorgan yesterday, assuming that crude rises to $40 per barrel this year and gains to $50 per barrel in 2021. If the price of oil remains depressed at $40 per barrel, defaults could be even higher, according to the firm.

According academics, stranded assets are “assets that have suffered from unanticipated or premature write-downs, devaluations or conversion to liabilities”. They can be caused by a range of environment-related risks, but not only, and these risks are poorly understood and regularly mispriced, which has resulted in a significant over-exposure to environmentally unsustainable assets throughout our financial and economic systems.

In the context of upstream energy production, the International Energy Agency defines stranded assets as “those investments which are made but which, at some time prior to the end of their economic life (as assumed at the investment decision point), are no longer able to earn an economic return, as a result of changes in the market and regulatory environment.”

Here we are, with the first stranded assets of the crisis we are facing.

“The Times They Are a-Changin” said Dylan …

Iconography : Joseph Vernet, a storm with sinking of a ship 1777 © Avignon Musée Calvet.