Green deal : where the money will come from ?

According to the communication of the European Commission, this project “aims to transform the EU into a fair and prosperous society, with a modern, resource-efficient and competitive economy where there are no net emissions of greenhouse gases in 2050 and where economic growth is decoupled from resource use”.

But when you focus on the Roadmap and its 48 key actions, let’s be honest : it’s on the paper very ambitious !

I will focus here on the most important actions related to the “climate ambition” chapter :

As early as March 2020, the climate ambition will be carried by a European “Climate Law” proposition enshrining the 2050 climate neutrality objective. This law should be the cornerstone of all the other policies.

This objective of achieving a climate-neutral EU by 2050, endorsed on December 12th by the European Council will not be easy to reach.

One Member State (Poland) already explicitly indicated to be unable to commit at this stage to implement the 2050 neutrality objective. This position is supposed to be reviewed (or not) in June 2020 in the light of clarifications on so called “Just Transition Mechanism” and the negotiations around the Multiannual Financial Framework 2021-2027 (MFF 2021-2027). No doubt that Hungary or Czech Republic will also be vocal on this. Keeping in mind that according to the article 192 of the Treaty on the Functioning of the European Union (TFEU), the Council must adopt unanimously “… measures significantly affecting a Member State’s choice between different energy sources and the general structure of its energy supply.”

By Summer 2020, the European Commission will deliver a comprehensive plan to increase the EU 2030 Greenhouse Gases reduction targets to at least 50% and towards 55% cuts from 1990 levels. Such raising ambitions are a condition to make the first objective credible. They would also put EU in a position to make announcements at the COP 26 due to be held in Glasgow in November 2020, five years after the Paris Agreement.

In the Roadmap annexed to the Communication on the European Green Deal, the Commission commit to do this “in a responsible way”. The half-empty glass enthusiasts will promise that lobbies will be vocal there. The others will simply refer to the fact that such a move must be supported by proper impact studies, that’s it, many of them being already ready.

Such a target is not out of reach : in the wake of Paris agreement, the original EU’s “National“ Determined Contribution (NDC) contained an emissions reduction target of “at least 40%” below 1990 levels by 2030 (UNFCCC, 2015). The adoption of eight pieces of legislation in the Clean energy for all Europeans package in 2018 and early 2019 has created a framework for the decarbonization of the energy and buildings sectors by the middle of the century. And according to climateactiontracker.org, this legislation – in addition to a number of other policies – would already lead to emissions reductions of almost 48% by 2030.

Last but not least, by 2021, a proposal will be done for a carbon border adjustment mechanism for selected sectors, so that a level playing field within the EU internal market protect EU industries impacted by the decarbonation.

In order to estimate the potential impact of the EU’s climate and energy targets for 2030, the Commission has developed a group of scenarios called the EUCO scenarios.

The most recent scenario is called the EUCO3232.5 and models the impact of achieving an energy efficiency target of 32.5% and a renewable energy target of 32%, as agreed in the Clean energy for all Europeans package, already mentioned.

This scenario was used to support the Commission’s June 2019 assessment of the draft national energy and climate plans (NECPs), submitted by Member States.

Based on this scenario, the yearly additional investment necessary to achieve the EU’s climate and energy targets by 2030 are estimated at around €260 billion per year … €2.6 Trillion on the decade. 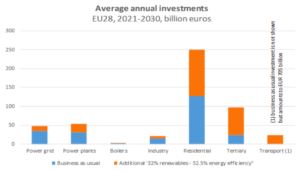 In line with the Roadmap, the Commission released yesterday the investment pillar of the Green Deal, the European Green Deal Investment Plan (EGDIP), also referred to as Sustainable Europe Investment Plan (SEIP). They love acronyms in Brussels …

All in all, the Plan is supposed to mobilize at least €1 trillion in sustainable investments over the next decade, through the EU budget and associated instruments

The next long-term EU budget will run for seven years from 2021 to 2027 and will invest substantially in climate- and environment-related objectives. 25% of its total would contribute to climate action and spending on the environment across multiple programmes (e.g. European Agricultural Fund for Rural Development, European Agricultural Guarantee Fund, European Regional Development Fund, Cohesion Fund, Horizon Europe and Life funds).

Taken together and extrapolated from 7 to 10 years, as well as assuming that the climate target post-2027 will be at least maintained, the EU budget will provide €503 billion to the European Green Deal Investment Plan.

The InvestEU Programme, built on the successful model of the Investment Plan for Europe (so called the “Juncker Plan”)was originally proposed in June 2018 as part of the future long-term EU budget. It is part of and complementary to the European Green Deal Investment Plan, as it will leverage around €279 billion of private and public climate and environment related investments over the period 2021-2030. This represents roughly 30% of its investments. Technically, it will provide an EU budget guarantee to allow the EIB Group and other implementing partners to invest in more and higher-risk projects, crowding in private investors.

And because everything is linked, the recently agreed EU taxonomy framework will feed into the InvestEU climate tracking methodology that will be used by the InvestEU Implementing Partners. The Commission will also explore how the EU taxonomy can be used in the context of the European Green Deal by the public sector, beyond InvestEU.

An important political element of the Plan is the Just Transition Mechanism, targeted to a “fair and just green transition“ in the regions most impacted by the decarbonation of energy production, Poland, Hungary, Czech Republic …

Lastly, the Innovation and Modernisation funds, which are not part of the EU budget, but are financed by a part of the revenues from a key policy tool – the auctioning of carbon allowances under the EU Emissions Trading System – will provide some €25 billion for the EU transition to climate neutrality, with here also, a special focus on lower-income Member States in the case of the Modernisation Fund. 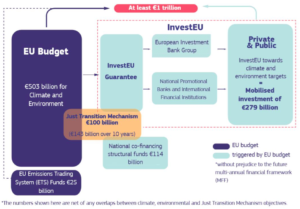 If the Plan works, it will bring €1 Trillion for a need of €2.6 Trillion for the decade … the balance will have to come from national, regional, local public entities and from the private sector.

Even if a significant part of the €1 Trillion already comes from private sources, the scale of the investment challenge remains beyond the capacity of the public sector alone. The private financial sector has a key role to play in re-orienting investments towards more sustainable technologies and businesses and contributing to the creation of a low-carbon, climate resilient and circular economy.

That’s what is called “Green finance” …

Iconography : An offshore wind farm on the North Sea, off the Helgoland Archipelago, Germany © MaxPPP