At the sources of Banking Union

In the run-up to the European elections, we could be satisfied with the fact that  the issues surrounding the Banking Union do not excite the crowds : citizens are generally interested in this type of subject only when current or imminent crises threaten their wallet, saver or taxpayer.

It would be useful, however, to talk about it, maybe coming back to a couple of simple ideas.

For that, I will start far from Europe, in a small Florida town where nothing happen ever. John and Brenda are lying in their bed, but John can not sleep. He turns in bed until he wakes Brenda. She questions him. John’s response: “I am very anxious, I borrowed $100,000 from Bob, the neighbor opposite … but I am unable to reimburse him.”

It’s Brenda’s turn to stop sleeping. She thinks. Then suddenly get up, open the window and scream “Bob, your $100,000, we’ll never pay you back”. Then she goes back to bed and says to John, “You can sleep now, it’s Bob who will not sleep anymore …”

This situation in which the person who is indebted holds the lofty credit to his lender falls under the notion of “moral hazard”, a situation theorized by Adam Smith, resulting from a modification of the behavior of a co-contractor, making it contrary to general interest or the interests of the other parties to the contract “.

The “systemic” nature (threatening the entire system) of the banking and financial crisis of 2008, created a situation of moral hazard at the level of all developed countries : the global financial system put States in a situation of non-choice, requiring them to save their financial institutions, whether they have failed or not.

European States were then swept up in an unprecedented financial storm, and it was discovered that not all participants in the euro area were equal in front of the debt. 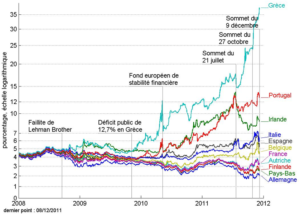 Protestants do not like moral hazard applied to debt. The Germans have even adopted the same word “shuld” to refer to both the debt and the fault, it’s not nothing!

And I hope I will be forgiven for observing that of the eleven eurozone countries represented above, those of Catholic tradition are all on the top curves. the countries of Protestant culture all below.

Anyway, such a situation being difficult to maintain, the European Council of 28-29 June 2012 decided to launch the Banking Union project, with the idea to address this issue of “moral hazard” that allows bail-out of banks (bail-out from state source in practice). The objective: to avoid the call to the taxpayer to take the losses.

In the wake of this summit, Mario Draghi pronounced July 26 the same year the famous speech of “whatever it takes” which earned him the title of “man of the year 2012”, awarded by the Financial Times … The objective : to break the anticipations of default of one of the Member States.

In some way, the bail-in for the banks and the bail-out for the States.

A series of important texts were then adopted and revised :

But from revisions to revisions, the progress are too slow. Regulators and different stakeholders indulge in an obscure vocabulary, which allows everyone to camp on their positions. On the one hand, those who prioritize the sharing of risks (dare I say the Catholic countries?), On the other, those who ask to start by reducing it (the Protestant countries).

So yes, we should talk about Banking Union, and more generally about Economic and Monetary Union. These are eminently political and citizen subjects.

← Before the charge "We Europeans" →
Gérer le consentement aux cookies
We use cookies to optimize our website and our service.
Manage options Manage services Manage vendors Read more about these purposes
Preferences
{title} {title} {title}